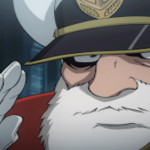 Agreed. Mod server download down, any third party link would be appreciated.